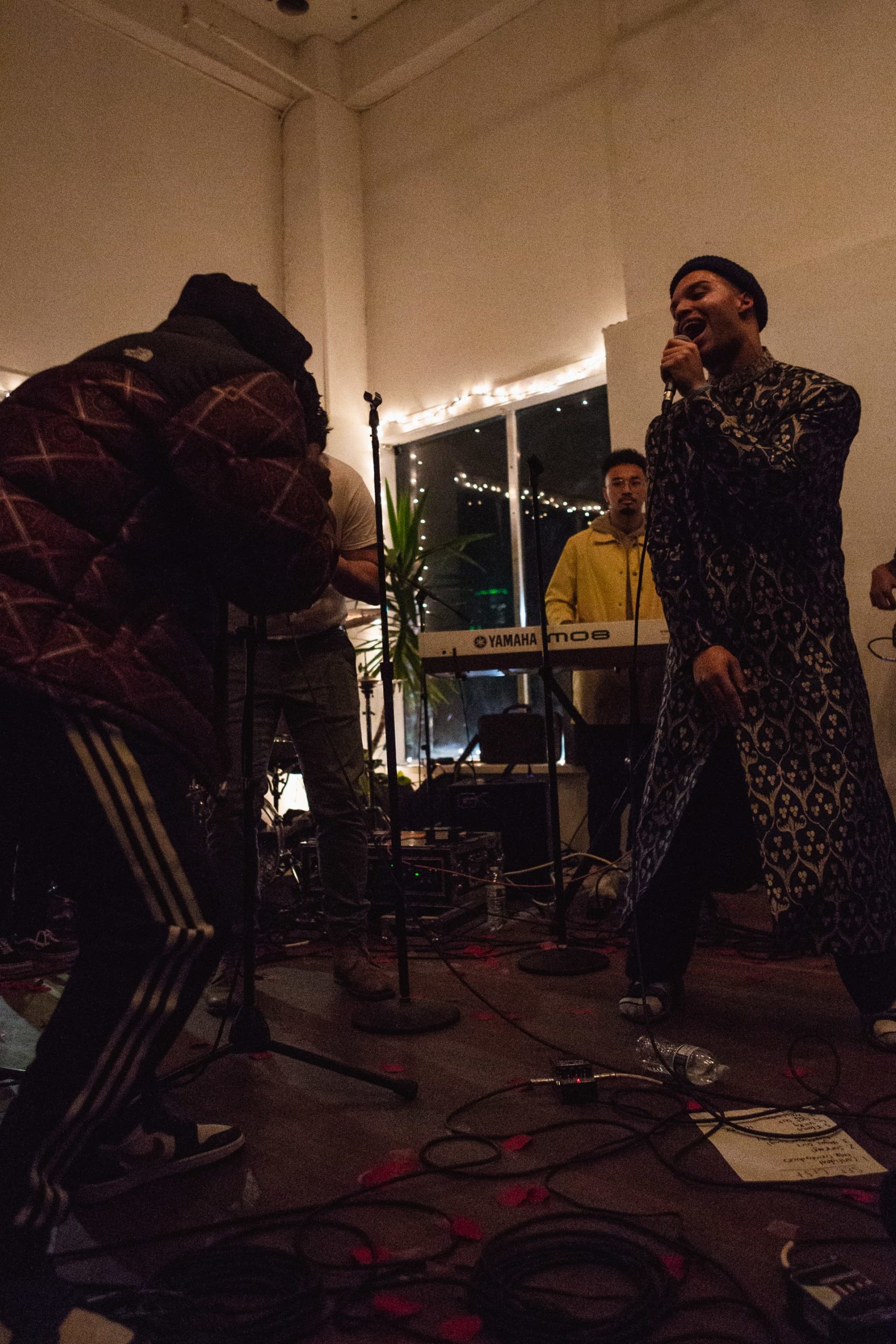 Seattle’s trendiest Gen Zs and Millennials gathered for a celebration of Tri-cities native MistaDC’s first full length album, Sorry We Lost You, at LoveCityLove, a clothing store in south Capitol Hill, on Friday night. The album came out early December 2018, but the excitement in the room was as fresh as if it had dropped that night. The room itself had an industrial feel — rough edges around doorways causing the place to look like an in-progress construction site — yet it was lightly decorated for a young crowd, from the sprinkling of fake rose petals across the floor to the minimal art exhibit in an adjoining room, flooded with green light. Windows in the floor sent light from the bright basement into the main level, creating a dreamy, late-night effect for those waiting to see the performance.

The first act of the night was Baja Boy, a project by Tacoma native Christian Taylor. He was accompanied by another young friend, both looking fresh out the skate park, sporting vans and long, shaggy hair.  With their drawling synths and playful autotune effects paired with lyrics about loneliness and navigating young love, their sound was reminiscent of something you’d slow dance to at prom in a modern teenage rom-com. The only thing missing was the disco ball. Baja Boy’s “Lonely” is strangely reminiscent of Mac Demarco’s “Chamber of Reflection,” or, as my friend remarked, more general “Mac DeMarco-core.” Listening to Baja Boy’s set made me want to buy a polaroid — not the cute, pastel-colored type you’ll find in Urban Outfitters, but the grittier, sharp edged Polaroid 600-type contraption. Baja Boy is an act that will surely garner more attention in the coming years. Next up for Taylor is a performance in the semifinals of MoPop’s Sound Off competition.

The crowd edged a bit closer as Soultanz prepared its set. The electro-soul duo is comprised of singer and producer Shayhan Mashayekh and producer Jared Rubens and was accompanied by a live saxophonist. With catchy beats, throaty sax solos, and strong vocals that flitted between rapping and singing, their sound was evocative of Chance the Rapper circa Coloring Book. Mashayekh’s energy pulled the crowd in effectively, and the entire group on stage had their eyes closed and their bodies bent over their respective instruments. More and more people began to stop in front of the street-side windows lining the corner of the stage, deciding that this was more interesting than their other destination and instead opting to join the release party. Soultanz played a few songs before hopping off the stage to excited applause, and, as the set up for MistaDC’s set began, people crowded closer and closer to stage.

Even before MistaDC came on, what stood out the most was not the shin-length, ornately designed top he wore, but his humble attitude towards success and his gratefulness to the Seattle music community for its support. Surrounded by friends, family, and strangers, MistaDC was very open to sharing his heart with the crowd, prefacing his performance with “I’m an emotional guy” and expressing his love for the Seattle arts community.

Launching into his setlist, MistaDC was accompanied by a full band, including Baja Boy and the singer and saxophonist from Soultanz, among others. While some nerves were ironically apparent during his opening track of the night and of the album, “Confident,” they shook out quickly as MistaDC settled into the stage. By the time the crowd started singing along to the upbeat chorus of the next song, “Sunrays,” this night was everyone’s party. The night passed quickly, with MistaDC bringing in collaborators like Nyles Davis on “New Soul,” Mashayekh on “Flaws,” and Alla and Nobi on “Vicky, Fly Home.” “Get Out” was a particularly memorable track, with its strong vocals, simple production, and impassioned guitar. As MistaDC finished the night by popping a bottle of champagne, being in the crowd at LoveCityLove felt like being privy to an exciting secret on the verge of breaking out.

Northwest culture magazine Human Condition helped sponsor this show and consistently holds events for young artists to meet and create together. Within the crowd, I noticed other Seattle artists like Sam Lachow, Travis Thompson, and Sol that came out to support MistaDC. Homegrown venues and artists are the heart of Seattle, and it’s exciting to see how MistaDC and his peers will push us towards the future.